To start 3D printing or Laser Cutting, you'll need to create an account here. Once done, you'll be able to upload your files and get live quotes of yours parts

By clicking on “Create my account”, you give Sculpteo the authorization to process the information submitted above to create your account on the website. By clicking on corresponding boxes, you give Sculpteo the right to send you by mail its newsletter, news from its blog and/or commercial communications. To know more about how Sculpteo processes your personal information, you can check the privacy policy.
Or

What Can 3D Printing do? 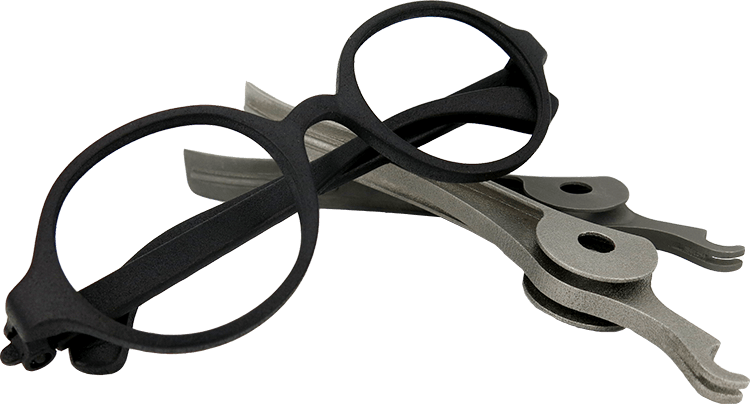 3D printing has become increasingly democratized in the past few years. The press releases daily updates highlighting the brilliance of the emerging technology, but what can 3D Printing do exactly? Is it possible to use it not only for prototypes but also for production?

If you’re looking for the essential information about 3D printing, or additive manufacturing, you’re in the right place. The following page aims to level you up on this new way of producing objects.

What does 3D Printing enable?

The invention of 3D printing targets 2 things: reduce time to get the first version of a product and emancipate many constraints that are not possible with traditional production methods. For example, with 3D printing, it is possible to print complex geometric shapes and interlocking parts that require no assembly. It is also possible to produce single objects, in small quantities, at low cost and fast delivery. This technology also helps in the reduction of production-related material loss. For more information on the benefits of 3D printing compared to plastic molding and other manufacturing processes, you can refer to our comparison page between 3D printing and traditional manufacturing methods.

3D Printing can produce different objects without creating specific tooling or even using several tools. This is how 3D Printing helps increasing flexibility in the production flow and helps reducing industrial expenses. Since there’s no need to build a dedicated production line, it helps also to significantly save time: 3D Printing enables us to innovate faster and mechanize faster. Since 3D Printing makes a replica of the 3D files one by one, so economies of scale can’t be realized when the same file is produced several times: this is clearly different from series manufacturing methods that aims to produce millions of units of the same objects. On the contrary, 3D Printing is the perfect method for on-demand and customization needs. There are a lot of other good reasons to choose 3D Printing instead of other manufacturing methods. For more information on the benefits of 3D printing compared to plastic molding and other manufacturing processes, you can refer to our comparison between 3D printing and traditional manufacturing methods page.

Finally, 3D Printing gives to everyone the power to manufacture objects only when they are needed or desired. It’s a fantastic process for the creative ones who wish to make something out of their imagination. 3D Printing enables in this way many people to produce and sell their creations by skipping traditional edition and distribution networks. 3D Printing is also useful to reproduce objects that are no longer on sale, for instance in order to repair an old bike for which spare parts are discontinued.

3D printing for industry and for the general public

3D printing has been growing in the media spotlight in recent years. This additive manufacturing techniques are far from being a brand new technology. This 3D printing method has been used in many professional environments for nearly 30 years.

3D printers now occupy an ever more important place in the media, this is mainly due to the opening of this technology to the general public. Having for a long time been restricted to professionals and industrial prototyping, 3D Printing now allows printing of parts and finished products and has become accessible to the general public.

3D Printers are usually divided into 2 categories: home 3D printers and professionnal 3D printers. This distinction is not always true: some companies own home 3D printers for the very early stages of a prototype and the general public can have access to professional-grade 3D printers in FabLabs or with online 3D printing services such as Sculpteo.

Beyond the awesome stories that come in the media spotlight, 3D printing has already made a shift in the manufacturing process of various industries such as dental and hear-aiding, aerospace, civil and military aeronautics, jewelry… The more we work on 3D Printing technology, the more we figure out that very few industries won’t take benefit from 3D Printing!

Professional 3D printers for everyone: Sculpteo

Sculpteo is a 3D printing service online. Our printing centers are exclusively equipped with high-performance professional 3D printers. We have several materials and different finishes are available. Our service is available to all, whether you are a self-employed and small business, larger structure that is not equipped with professional 3D printers, or to individuals for their personal creative needs.

Our ambition is to offer to all the ability to manufacture objects in our factory by controlling our 3D printers directly from a desktop. 3D Printing should not be a matter of technicians: it has to be an affordable and easy way for all to produce faster and better.

For more information, visit our section about us or try our service now and Transferring a 3D File. By doing so, you will access an immediate price quote as well as manage your 3D files thanks to our free tools.

Ready to make your 3D model a reality?

Upload your 3D file, select the materials and finishing options, and let our professional 3D printing service handle the rest. Your parts are delivered to your door in a matter of days. Get your 3D printed parts today.